For the past 30 years I have studied the decision making process to try to find shortcuts that doesn’t sacrifice the quality of the decision yet produces a positive result. You know, do less, get more. Everyone is looking for shortcuts, or to get lucky. When I play pool and my opponent lucks the game-winning ball in the pocket, they invariably will say, “better to be lucky than good I guess.” I usually just snare at them.

One thing I noticed about really good pool players is that they seem to “get lucky” way more often than the average player. I wonder why that is?

It’s the same for a top performer at anything, they get lucky way beyond the statistical norm, they always seem to be in the right place at the right time, making the right decision. There’s only one explanation for this, they aren’t lucky at all, they are ultra-skilled at what they do. The decisions they make are natural, brilliant, optimized, so even when they are wrong or a little off, they put themselves into a position where the odds are hugely in their favor. They have developed a highly refined habit, which I equate with skill, to collect the right information, plan their course of action, then act.

Sometimes they miss, but more often they hit, with an over share of lucky hits. They are just better because they have a highly refined habit. It’s part of their psyche and their muscle memory. So what are these habits they have mastered? It turns out there are lots of them, some are specific to the role they play or the thing they have mastered, but in a basic sense, there are 3 habits that stick out above all others. I mentioned it in the previous paragraph, they are:

Let’s go back to my pool playing friend and examine a particularly difficult shot he makes quite often, and when he misses the object ball ends up in a spot that makes it difficult for me to capitalize on his miss (that’s the luck part, not really). Yeah, he makes a cut shot, which is a shot at an extreme angle, and he aims at what is called the pro side of the pocket. I know, you’re wondering what in the heck this means, so I’ll explain. Check out this illustration. Here’s the shot… So, here’s the shot. it’s a relatively difficult shot for most pool players. For a pro it’s a fairly easy shot, but that’s not how a pro thinks. Most people will just try to make the shot the best they can, and aim for the center of the pocket. Most average pool players might have a 50/50 chance of making the shot. Maybe less if the angle is extreme. But the decision based on the amateur’s limited experience is to just make the shot. 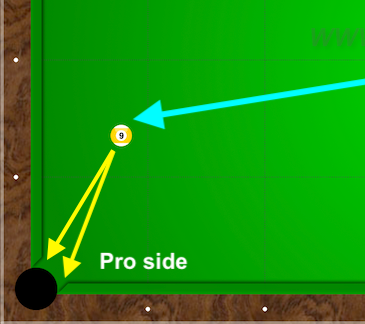 A pro, who’s made this shot thousands of times knows better. The pro knows that even with a shot they know they can make, there’s an outside chance they won’t make it. And if they miss, they don’t want to leave an easy shot for their opponent. A pro knows there are two possible ways to miss, the good way and the bad way. Let’s look at the options.

The pro knows that all shots are not perfect, and a miss is possible, so if they were to miss, they would want to miss in such a way that their opponent doesn’t have a shot or at least has a difficult shot. So a pro will aim in a way that “over-cuts” the ball, meaning they shoot with an even more extreme angle so that if they miss the shot the object ball hit the “pro side” of the pocket. If the shot were to miss on the other side of the pocket the ball would likely rattle in the jaws of the pocket and leave an easy shot for the opponent.

Not only that, but the cue ball would have hit the object ball thicker and deflect to a point on the table that makes the shot for the opponent super easy. As you can see in this diagram below. The opponent has an easy shot after the miss by the pro with the ball right in front of the pocket. 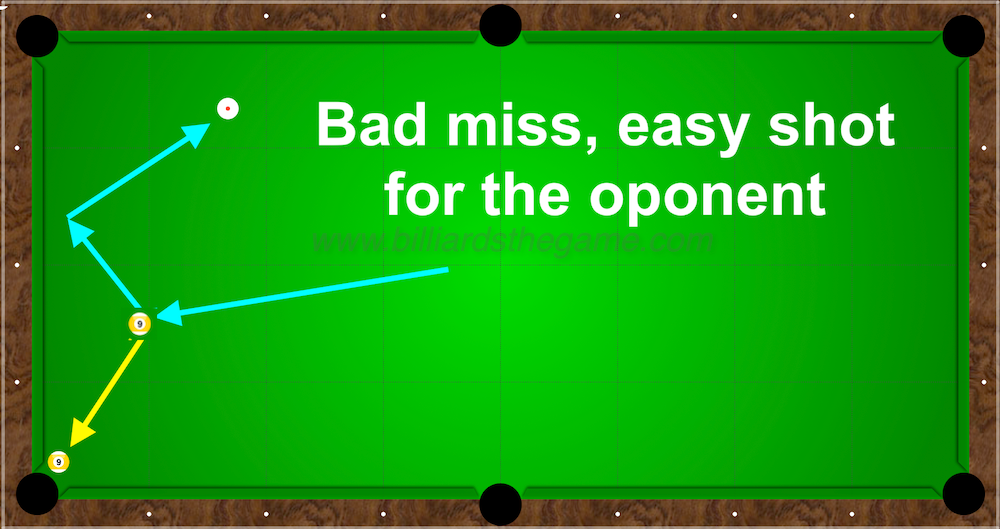 This is what we call a “bad miss” and would likely be catastrophic for the pro, as the opponent would have an easy shot to win the game. Now hold on, the pro isn’t a pro for nothing. This pro has made this decision thousands of times before and has learned that the right shot is to aim on the pro side of the pocket. And the reason for that is if the shot is missed, the object ball will likely bounce to the middle of the rail, and the cue ball will end up in the middle of the table, leaving the opponent with a very difficult shot, and thereby increasing the pro’s odds for success. See the diagram below. 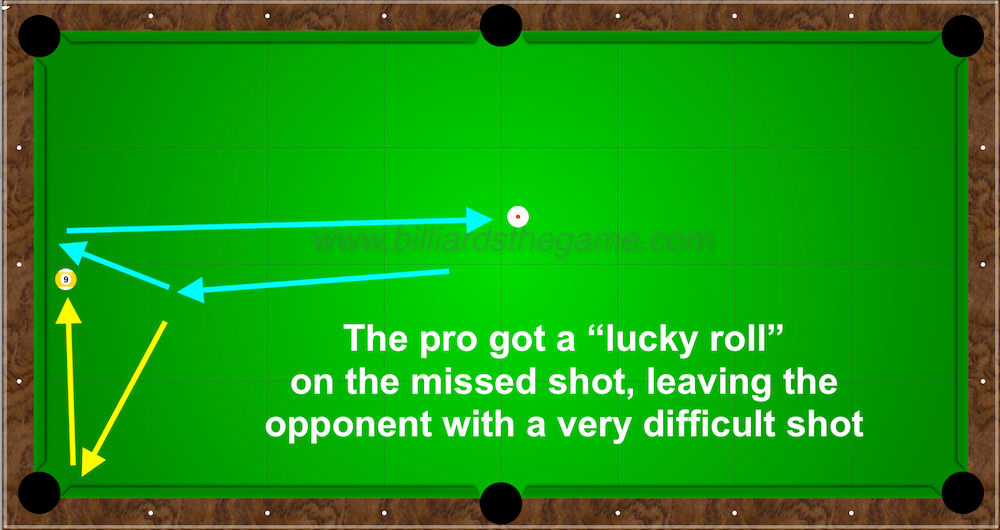 The decisions the pro made were the result of mastery over the three most important habits in decision making; Collect, Plan and Do. The Do habit becomes easier as you get better at the Collect and Plan habit. Let’s look at each habit.

This is where you collect information, ideas, things you need to do, projects, etc. The Pro Pool Player, at least most of the ones I know, are constantly trying to up their game. They analyze everything they do, from shot selection to the type of shoes they wear. They observe and collect. Each piece of information has its place, perhaps it’s a list, or some other collection device, a notebook or app on your smart phone. This information needs to be organized and prioritized for the next habit.

The Pro has daily, weekly and long range plans that need to be enacted upon. Addressing certain weaknesses in your game, getting ready for a tournament. Attracting sponsors, planning your diet, the list goes on. Perhaps the most important plans are the daily routines.

It’s one thing to plan, but without execution, your plans mean nothing. This is where the rubber meets the road, it is the most important habit you need to develop. This is where the pro develops the ability to be lucky even when they miss, this is where great things happen.

The one thing that is certain, your ability to develop these three habits will determine your success or your failure. The more you develop them, the greater your chances are for success, the more winds you will have, and you will be luckier than you ever dreamed possible.